Signals: After Turner
2019
Oil on Canvas, bronze, wood, code book
26 x 78 x 18
In 1801, Admiral Home Popham developed a signal flag code using combinations of 9 flags to represent alphabet letters and words to signal between ships in the fleet. The original code book listed over 3,000 words as combinations of 9 individual flags.

During the Battle of Trafalgar, memorialized in JMW Turner's The Battle of Trafalgar, 21 October 1805, Admiral Nelson signaled his final instructions to the British fleet from the HMS Victory with the phrase "England expects that every man will do his duty." Ironically, the word "duty" was not a word in the code book requiring it to be raised with individual letter flags. Turner's painting captures the moment when the last three letters "u-t-y" were raised.

This piece invites visitors to use Popham's code book to leave a word of 4 or fewer letters for the next visitor by rotating the code wheels.
PREV / NEXT   6 / 73
BACK TO ARTWORK 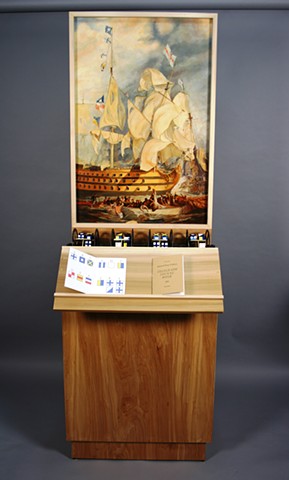